Believe it or not, the environment plays a strong role within the financial markets. You can look at how markets react to weather conditions in two ways: with extreme examples or basic examples. Both actually have quite a profound impact, although one type we only see a few times per year while the other is ongoing. And both can give you big opportunities to make a profit if you are well versed in how these things influence market prices. 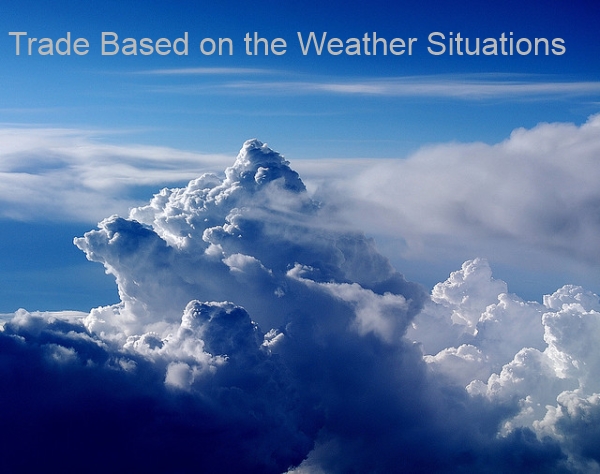 Let’s start with looking at some more extreme situations. This would cover things like Hurricane Sandy and Katrina, earthquakes, and typhoons. The severity of these events and the location of where they occur also can have an effect upon market conditions. For example, when Sandy hit the New Jersey Shore and Manhattan, the immediate impact was huge and very negative. Markets suffered in a big way because of the long term uncertainty that took place--along with the fact that the markets themselves were impeded because of the fact that the New York Stock Exchange is right in that area, too. This means that there were both physical limitations to trading, along with a very palpable fear that the storm may have caused enough damage to drive down stock and other asset prices, too.

What happened to the Philippines earlier last year was also traumatic to the people that lived there and their families, for sure, but economists have largely agreed that the economic impact was minimal. It was estimated that the storm caused $700 million in damage, and for a nation like the Philippines, that is a huge amount of money. But it also creates an opportunity to help, if you look at it right. The rebuilding will create jobs and plenty of work to do. It will also give the nation a chance to come back stronger than ever before. Also, the public awareness that the typhoon created has the potential to attract more international investments than before, which is also quite a good thing for the economy. Typhoon Haiyan was a tragedy for sure, but it could be a blessing in disguise for this nation and will hopefully be the catalyst that is needed to help a largely impoverished nation become a stronger one.

Nature doesn’t just happen when storms and tragedies hit, though. For example, this past winter has been one of the toughest ones in recent history for the Atlantic Northeast, with a lot more snow than normal and continued sub-Arctic temperatures for months. People still need to stay warm during weather like this, and that means they are spending a lot more money on their gas and electricity. Energy companies get more money and consumers have less for discretionary spending. This will drive up energy stocks and force down luxury assets. And one particular side effect happening now is that there are fewer homes being built, which will also drive down the prices of raw materials (think commodities) and major industrial builders.

Regardless of what direction prices are going, you can profit off of them if you have the knowledge to take advantage of change before it happens. Binary options help with this in a big way since you can trade in both directions with ease and no extra fees or charges. Binaries can be tough to trade with knowledge like this since you won’t find a lot of big housing construction companies listed, nor will you find a lot of the commodities that you might immediately think of to trade here, but there are still opportunities. Depending upon your broker’s asset list, you can find a few very relevant assets to trade and when you do, you can make a lot of money off of it.